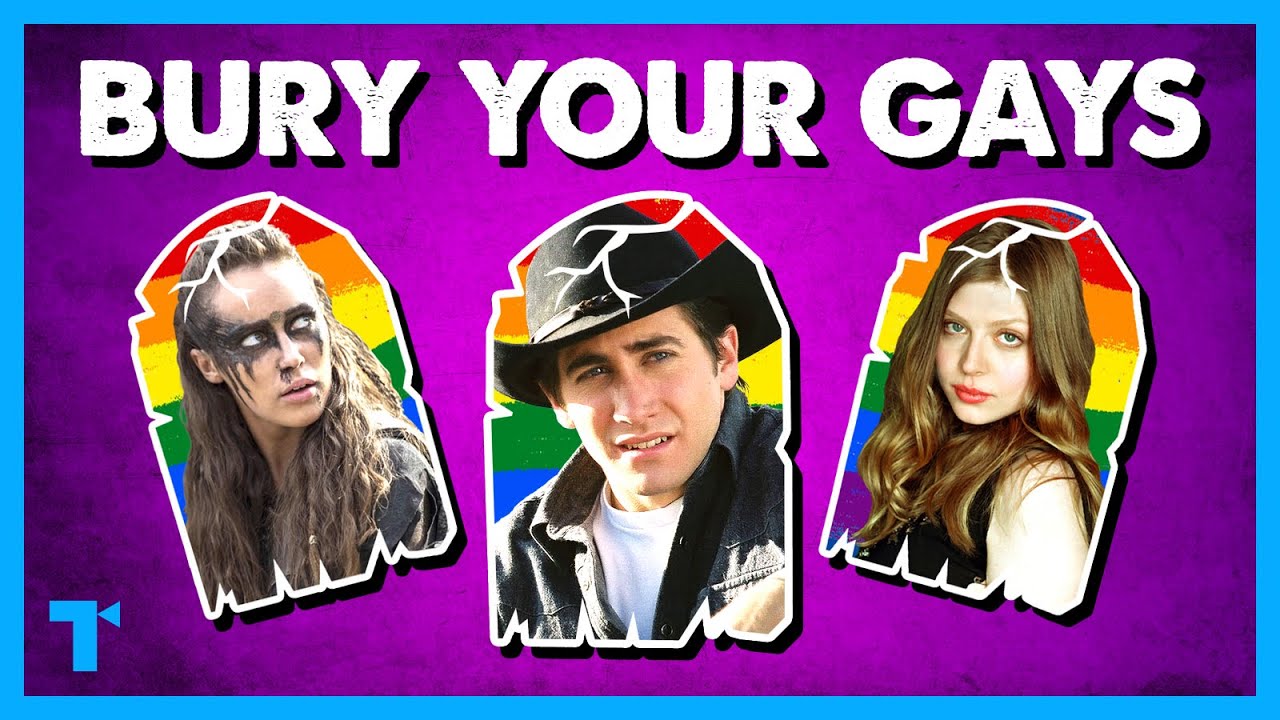 You must’ve heard the song “History hates lovers”. Well, the same or even worse can be said about the industry that is responsible for producing mainstream movies, series, cartoons, anime etc. And though the situation has advanced a lot in the recent decades, queer fans are far from being satisfied.

Instead of heartfelt stories, good representation and compelling characters, we all want and expect, the queer community gets a lot of queerbaiting, irrelevant side characters and painful meaningless deaths. Of course, this is not something the LGBTQ+ community has to deal with alone – a lot of times, women, and often, certain racial, religious and minority groups are experiencing the same discrimination and unfairness.

Nowadays, it’s not just popular to include a few queer, black or disabled people in TV productions, it’s almost mandatory. Society has moved on in terms of tolerance and respect. Everyone wants to feel represented at least in some way. If they aren’t – they run to social media to swear, complain and cry about it.

Their personal lamentations might get retweeted and repeated millions of times all over the internet and even end up in well-known news/review sites and magazines. That’s how the “cancel culture” works and it’s a dangerous and powerful tool that can end and start careers. Companies are afraid of that kind of feedback, so they’re trying their best to be “inclusive”. Or at least seem that way…

The massive and rigid Motion Picture Industry is also trying to be inclusive but they remind me of an elephant trying to fly. They know in advance that they’ll fail miserably but they still do it. Why? So that they can “check the boxes” and go on with what they know, can and are willing to do instead – bring another straight love story into the already oversaturated market. Great! Well done!

Since queer side characters and the relationships between them are often superficial and irrelevant to the story, it creates an illusion that the majority of the audience is not interested in that. I believe, that the real issue is not the lack of interest but the wrong people who are being hired to “write them into the story”. The goal is not the representation of the queer community, but rather a message “here, we included some gays, happy now?”.

The worst part is that queer characters, namely, their deaths, are being used as tools to propel the straight cis-gender storylines. There are so many examples in film and television, where queer characters are being “killed off” at random and with no regard for viewers’ feelings, that the phrase “bury your gays” was revived and a fierce movement striving to change the situation soon evolved.

“Bury Your Gays” is a literary trope that has appeared in media since the end of the 19th century. Works using the trope will feature a same-gender couple and with one of the lovers dying and the other realizing they were never actually gay, often running into the arms of a heterosexual partner. This trope was originally used as a way for gay authors to write about gay characters without coming under fire for breaking laws and social mandates against the “endorsement” of homosexuality.

However, “Bury Your Gays” persists today in a time and social context in which it is no longer necessary to give gay characters and stories bad endings in order to be published. [scholarworks.gvsu.edu]

So why are we back to the “bury your gays” trope in this century? Well, homophobia and slowly evolving traditional views aren’t the only problems.

As you might know, there are media reviews, popularity polls, ratings and lots of other statistical tools that help the content producers determine what the target audience enjoys the most. At first glance, these measures seem objective and reasonable, right? Well, not exactly.

They seem objective if we ignore the fact that queer characters often aren’t written as well as straight ones. Many actors and actresses that portray gay characters aren’t gay themselves, hence it might be harder for them to express certain emotions and struggles that the LGBTQ+ community experiences. And since the characters’ relevance to the story is also lacking, their ratings end up being way lower than they should.

In many cases, this is being done on purpose and queer characters are being added to the story just to be killed off later on. They are being treated like temporary “add-ons”, toys that are played with and thrown away, something that is in the story but will never become a significant part of it.

The “bury your gays” movement started as a defensive counter-attack against these widespread and unfair queer deaths, mainly in TV series. “You kill my character – I kill your ratings”.

One of the best-known examples is when the viewership of the sci-fi series “The 100” plummeted after a lesbian character Lexa was suddenly killed off in 2016. Fans didn’t just stop watching the series. They sent letters to the creators and magazines, organized meets and events, made websites and fan videos, and blasted Twitter with mass tweets.

On many occasions, they were trending on Twitter all over the world. It helped them spread information and find more supporters and other dissatisfied fans. Soon the whole thing exploded and someone had to take the blame.

The creator of the show personally wrote an apology letter to the fans, but it didn’t help to calm them. The LGBTQ+ community had had enough. That time, the industry could hear them loud and clear: “Queer Lives Matter”.

Queerbaiting is a marketing technique for fiction and entertainment in which creators hint at, but then do not actually depict, same-sex romance or other LGBTQ+ representation. [Wikipedia]

Queerbaiting is like throwing breadcrumbs at a lion. It’s food but it’s not. It’s gay but not gay.

This kind of manipulation and teasing is extremely annoying. It’s also sad that it actually works. Motion Picture Industry knows how little the LGBTQ+ community needs to stick around and watch 5 seasons or more of whatever they’re showing just to see a few scenes and interactions between characters that have a “gay vibe” around them. Is that really all we need? Is that enough?

When I watch something in hopes to see some gay action that I was promised but never get to see, I feel like mythological Sizifus – pushing a huge rock loaded with straight problems and romance up the hill and once I expect to see something gay at the top of a hill, it all ends and I have to start over, pushing another rock in some other fictional universe, just to be disappointed again and again.

And yet, I jump from one movie to the next, from series to series and from anime to anime. All I can honestly expect is to be inspired and have enough material to create a fan video or write a fanfic afterwards because what I saw in the original product is never enough.

Queer coding is the subtextual coding of a character in media as queer. Though such a character’s sexual identity may not be explicitly confirmed within their respective work, a character might be coded as queer through the use of traits and stereotypes recognisable to the audience. [Wikipedia]

There are many reasons why creators chose to keep their characters in the closet but the main one is definitely still prevalent homophobia in the industry. We often hear from the authors how they were censored or “guided” by their editors and other people in charge to change their characters and stories.

The main excuse in these cases is always the same: the “appeal” to the audience. And by the “audience”, they mean mainly cis-gender straight viewers and readers, the so-called “majority”. In other words, creators’ freedom of “queer” expression is very limited and heavily regulated by the industry. Queer coding is a way of escaping this structure and it works on the principle “if you know, then you know”.

Imagine that you have to follow a map to get to point “X”. There’s a main road that goes straight (pun intended) to where you need to go. Most will follow the main road and reach the goal but the selected few will choose to get there through side roads and back alleys. Eventually, they will all reach the point “X” but the way they chose to get there will determine how they’ll describe their journey.

The base of the story is the main road on the map. It’s a simplified version of the plot, something like “they wanted to save someone, they learned stuff, they went to fight the villain, they won”. Then queer coding is dwelling on the side roads and back alleys. It’s the context and sometimes a reason “why” characters did what they did. Something like “they wanted to save their loved one, they learned stuff and that they were gay, they went to fight the villain who was opposing their love (basically, a homophobe or someone who’s jealous), they won, happy gay ending full of rainbows but no kisses“. It’s the same story and yet, it’s very different.

In order to fully understand the plot, the viewer has to turn to side roads and slip into the back alleys. For those who chose the main road only, queer coding is invisible and unintelligible. They might even blame others for “seeing things that aren’t there”. That’s why queer coding causes a lot of misunderstandings and even fights among fans, including homophobic slurs and insults.

It’s even worse when we talk about cartoons and anime – queer coding is more subtle in them because many countries seek to protect children from… (life, reality, honest queer representation ???) This causes many misunderstandings and fights among fans. One side is screaming “they’re gay, it’s so obvious!” and the other says “no one ever said that, they’re obviously just friends/roommates/colleagues/enemies…”.

One of the most well-known and obvious examples of queer coding is probably “Xena: Warrior Princess“. Since the show ended in the early 2000s, she never got the chance to come out of the closet. But Smithers from the long-running cartoon “Simpsons” did. He dropped the queer coding act in 2016’s [S27] episode “The Burns Cage”.

Nowadays, both queer coding and queerbaiting are often seen in anime. Some of the examples include “Hunter X Hunter”, “Banana Fish”, “Seraph of the End”, “Yuri on ICE!!”, “Free!”… ok, I’ll stop here, because let’s be honest, most of the sports animes are secretly gay or full of queerbaiting.

The LGBTQ+ community is still being forced to read between the lines. Constantly. And then they are being harassed and called names for doing so by homophobes who prefer not to see there’s gay content hidden in the shows, movies, series and anime THEY watch. “These characters are straight! Go watch your gay shit! Leave this fandom!” they’d say. Well…

A. Most of the time that thing we both watch IS gay shit but not all of us understand the plot…

B. I can watch what I like and interpret it how I like. Freedom of expression also exists.

C. I’m not in the mood to watch the same openly gay movie/series/anime for the 10th time. We simply don’t have enough good LGBTQ+ content.

The disconnection between these groups of viewers is troubling. It causes a lot of extra pain in the neck. Not only  LGBTQ+ community doesn’t get to enjoy a full story they’d love to see because of queer coding, but they are also being hated for seeing it the way it was supposed to be seen in the first place.

On many occasions, I have had a heated argument with a homophobic or just really ignorant person about what is gay and what is not in television, movies or anime. Kinda ironic and funny. But also sad. The fact that these people are so confident about what they’re saying and have no idea how harmful or even painful their words can be…