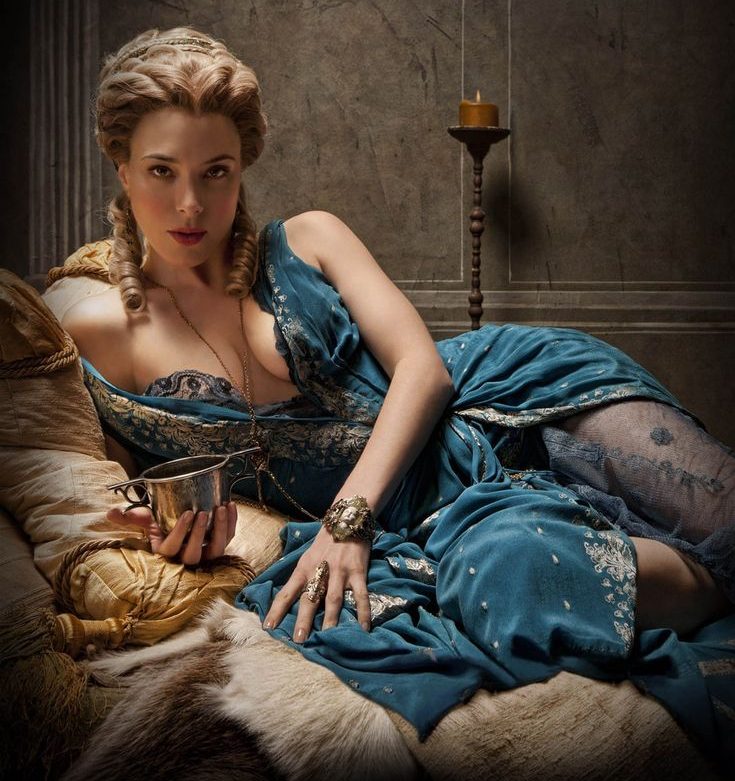 Lucy Lawless comeback as Lucretia in Spartacus: Gods of the Arena

Spartacus – the critically-acclaimed series from Starz which combines sex, swords, sandals, more sex and lashings of gore, often gets a bad press for being historically inaccurate. But it has a great cast and some superb scriptwriting. It also sees the resurrection of that great Antipodean warrior Lucy Lawless, formerly known as Xena Warrior Princess. [top-ten.tv]

Still, a force to reckon with

Lucretia a is the longest-running antagonist in the series who isn’t killed but commits suicide. Apart from being one of the women who had killed the most people with their own hands, the consequences of her actions caused the death of even more; Lucretia indirectly killed Melitta, Tullius, Licinia, Acer, Seppia and Ashur. [wikia.com]

If that’s not bad-ass enough, the character is also shown plotting, manipulating, taking opium, engaging in wild threesomes, cheating and forcing one of her gladiators Crixus to perform sexual intercourse with her in secret so she could get pregnant. And after Lucretia survives a massacre at her own house (The first season – Spartacus: Blood and Sand) she goes crazy, steals a baby that she wants to ‘take’ with her and commits suicide (The second season – Spartacus: Vengeance). After all the mess that she’d created – Lucretia leaves the story on her own terms.

If in Xena: Warrior Princess the lesbian storyline was subtle and never outspoken, in Spartacus Lucy’s character Lucretia was entirely open about her love and passion towards her friend Gaia (ac. Jaime Murray). The faithful fans of 90’s Xena finally got to see the actress in a short-lived but very sexually explicit relationship with another woman.

That woman is a force of fucking nature, one that has blown many an unsuspecting man to his ruin. – Batiatus regarding Gaia.

Lucy Lawless’s presence in the first two seasons and the mini prequel of Spartacus is still as charged with power, strength and wicked sexiness as it was in Xena. I’m really sorry and sad that the main actor Andy Whitfield who played Spartacus died, but if he didn’t – the prequel Gods of the Arena and these amazing scenes simply wouldn’t exist…